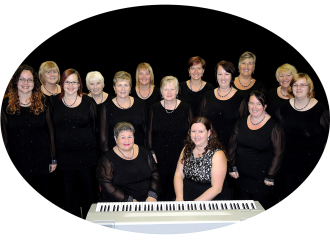 Harmony originally started about 20 years ago as a small singing group of friends who used to perform a capella (unaccompanied). After a meeting between these friends a new group under the same name was formed in February 2006 under the direction of Wendy Murphy who is now their Musical Director and Accompanist. They are growing in strength from year to year gaining new members from all around.

Since their formation, under the guidance of their Musical Director, they work extremely hard to produce a new, wide varied range of repertoire including, traditional welsh songs, pop songs, religious songs, songs from the shows and many more. Hopefully, there will be something for everyone in the mix.

Harmony have performed in Cornwall with another Ladies Choir and have enjoyed taking part in a Music Festival at Bangor, Northern Ireland in 2010. They have also performed a number of times at Cardiff Millennium Centre and have shared the stage with Chris Needs at St David's Hall.

Our Debut CD ‘A New Beginning’ was recorded in 2010 which includes some of Harmony's favourite songs. More recently, they have recorded a 2nd CD - 'Sing For You' in 2014. This CD contains some more songs that have also become favourites. Hopefully, another will be recorded in the future.

A number of times, the choir outfits have been sponsored by David Emmanuel and the choir would like
thank him for his support.
Harmony are very much looking forward to the future to see what it holds for them and continue to work hard in weekly rehearsals preparing new songs for future performances.

HARMONY are a choir based in Maesteg, South Wales.
We are available for Weddings,

Please do not hesitate to

We are female choir, regularly

rehearsing at Nanty Rugby Club every Monday evening from 7:30pm - 9:00pm and are always looking for new members so don't be afraid to come along. If you would like any more information do not hesitate to contact us.